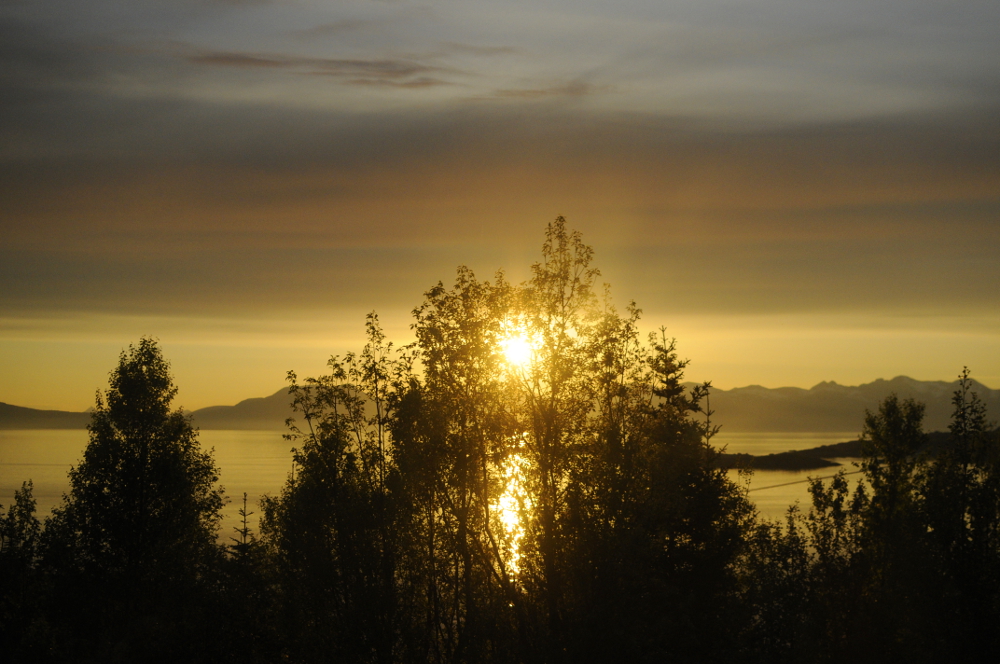 The summer in the Arctic Region is dominated by the towering sight of one of the greatest phenomena in the world: The Midnight Sun.

The Midnight Sun is an astronomical phenomenon that can be observed in the Arctic and the Antarctic beyond each of the Polar Circles (66 degrees, either North or South). Despite its almost mythological sounding name, the Midnight Sun is simply the Arctic declension of a phenomenon everyone living north or south of the Equator has experienced: The lengthening of the day during the summer.

Indeed, because the Earth is somewhat tilted on her axis, different regions of the globe get different amounts of sun throughout the year. Nowhere is the phenomenon more apparent than in the Arctic and the Antarctic where the tilting is at its paramount. In those regions, the sun can be seen continuously throughout a varying period of time (depending on the latitude) throughout the summer.

In this period, the sun still varies in intensity throughout the day and can be seen higher in the sky during mid-day than during the night. However, towards midnight, the darkest moment of any ´normal´ day, the sun has still not disappeared. Instead, he graciously touches the northern horizon, emitting a powerful reddish flare of intense beauty. Sometime between midnight and one in the morning, the sun stops his descent and ´rises´ anew, making it possible for onlookers to witness a typical sunset-type haze immediately preceding an impressive dynamic display of sunrise light, and all of this in just a few minutes!

The further north one goes, the longer the Midnight Sun lasts. In the geographical North Pole the Midnight Sun reigns supreme over the land of ice and snow for 6 whole months while at the level of the Arctic Circle the same sight can be seen for about a months-time in June. Places situated slightly south of the Midnight Sun still get the chance to experience this magnificent display thanks to the refraction of the sun’s image on the atmosphere so such places like Akureyri in North-Iceland get to witness the Midnight Sun for a few weeks each summer as well.

The best place to experience this literally radiant phenomenon is the coast of North-Norway where the endless Northern Ocean is illuminated each night by this most bright display. Many voyagers have made the voyage to the coasts of the counties of Troms and Finnmark, the country’s Northernmost regions, in order to witness such beauty. Seeing the Midnight Sun still isn’t always an easy endeavor because of the Norwegian shoreline’s capricious weather. Indeed, only a clear sky will let onlookers gaze at the marvelous view of a golden sun shimmering over the endless sea, coloring the pale horizon with rays of scarlet lightning. Truly, the Midnight Sun is a sight each and everyone ought to behold at least once in their lives.