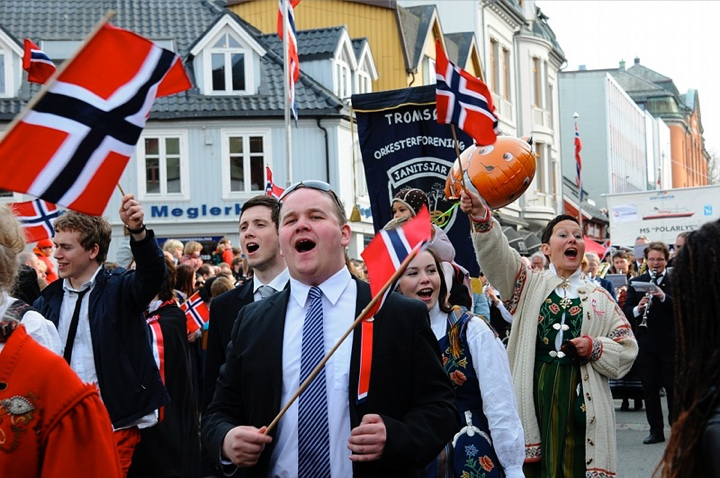 The seventeenth of May is Norway’s National day, celebrated all over the country and throughout the world wherever there are Norwegians, but the meaning of this day is somewhat different for those living in the Norwegian High North…

1814 was a very special year for the Norwegian people. For the first time in more than four centuries of Danish rule, Norway was de facto independent. Separated from Denmark by the blockade imposed by the British forces who opposed the pro-Napoleon government in Copenhagen, Norway had no other choice than to organise herself.

Soon, representatives from all over the country were called and a meeting was scheduled to take place in Eidsvoll, North of Oslo (then called Christiania), in the month of April and May. Unfortunately, because of the very long distances separating Christiania and North-Norway, the Constitution had already been ratified and signed the 17th of May, before the North-Norwegian representatives could even be elected. For this reason, some still say that North-Norway could have grounds to claim independence or at least autonomy.(1)

Fast-forward more than a century later to 1940 and Norway has become a fully independent and functional state with the 1814 Constitution applying throughout the land all the way to North-Norway. Unfortunately, in April of that year the German army invaded Norway and quickly took over the whole country south of Trondheim. As it has been written before, the Royal family and the government fled to Tromsø, 69 degrees North, from where they directed the Norwegian troops during the battle of Narvik (2).

The 17th of May of this year, the celebration of Norway’s national day was forbidden by the enemy troops that occupied most of the country. Only in the free Tromsø and North-Norway could the inhabitants properly celebrate. At this occasion King Håkon, sheltered in a remote woodland cabin just south of Tromsø, addressed the nation in a now famous radio transmission, where he commended the people for their courage in the face of adversity (3). During the same transmission the journalist and author Nordhal Grieg read a poem he wrote for the occasion. The poem, aptly named 17 Mai 1940, was such a moving and masterfully crafted piece that it immediately entered the national consciousness and remains one of the most well-known Norwegian poems to this day (4).

Despite all of the Norwegian efforts, the German advance could not be stopped, and the representatives of what was left of the legitimate government left Tromsø together with the king the 7th of June to coordinate the fight from overseas. The 13th of May 1945 the crown-prince Olav returned to Norway and exactly five years after he left the country, the 7th of June 1945, king Håkon returned as well.

Since this day, the 17th of May has returned to its original meaning: a celebration of Norwegian independence, peace and everything Norwegian. All the way from the once deserted Oslo castle to the ever-free Arctic North.